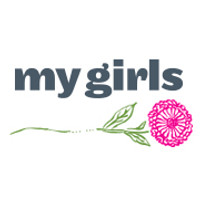 As a wife, mother of two, and sales representative for , Palmer doesn't spend loads of time on her wardrobe. "I like classic styles with a bit of contemporary flair," says Palmer, who dresses casually when working at home and favors pantsuits for client meetings. But, she adds, "now that I have much shorter hair, I'm liking ruffles and more feminine styles."

Nicholas used makeup to create what he calls "a combination 2009/1940s look," with both strong eyes and lips. Keeping the tones monochromatic and picking up the copper hues in her hair make it all work, he explains.

With her new shorter hair, Palmer had been wearing scarves to soften her look. She thinks the cascading ruffles of this chic dress have a similar, though more glamorous, effect.

"I usually wear dark grays and blacks, typical New England colors," says Palmer. She wanted a change but doesn't really like pastels. The combination of the soft gray dress with gold and copper-toned accessories was the unexpected compromise she was looking for.

Palmer's initial qualm about Boyajian's choice of outfit: "I'm not really a dress person." But after the addition of leggings and a contrasting leather belt, she was instantly won over. Palmer hadn't worn leggings with high heels before but says she'll definitely do it again for future evenings out.

Palmer likes the versatile gray tone of these Michael Kors dress sandals, which, along with the Big Buddha clutch, are from Cuoio in Boston.

"I'm in court just about every day and always wear a tailored skirt or pantsuits," says the divorce attorney. "And in this economy, there are more divorces than ever." Purtell, however, is happily married and has a 9-year-old daughter. For a change of pace, she wanted a less formal dressy outfit that's ladylike. The one prerequisite: "High heels! I'm only 5-foot-2."

"Rosemary has such beautiful eyes, I decided to keep the shadows soft to let the green color shine through," says Nicholas. In contrast, he decided to give her bold red lips to match the snazzy bag and shoes.

The right accessories are especially important to give petite women the illusion of height. The white silk flower at the neckline draws the eye up, while the red accessories are eye-catching without overwhelming her. And the Marc by Marc Jacobs pen shaped like a lipstick really gave her a laugh.

Purtell was instantly smitten with this Chikara organza-trimmed wrap top. "It's so comfortable. The shirt really gives," she says.

Contrasting the colors of a blouse, pants, and shoes is considered a don't for petite women, but this outfit works because of the proportions. With the knit top skimming the hips and the elongated legs of the J. Crew pants, Purtell actually looks taller.

"I love those shoes!" enthuses Purtell of the Stuart Weitzman patent high heels, but adds, "I would never wear that color or open toes to the office." Along with the Big Buddha clutch, the shoes are from Cuoio in Boston.